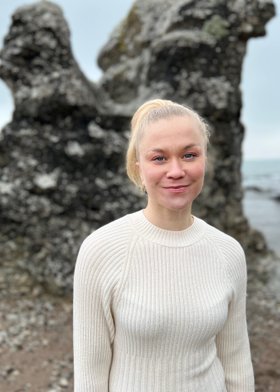 Anna Näsström is a Swedish freelancing dancer and choregrapher raised in Skåne, based in Stockholm. She is educated in modern dance and performance at The University of the Arts in Stockholm (SKH/DOCH) and has also studied in New York and worked around Europe as a freelancing artist for twelve years. She has a background in social, non-institutionalised danceforms, Ballroomculture and a strong connection to clubculture and "streetdance" in different ways. Anna has recieved "The Swedish Arts Grants Committee"'s working grant for 2022-2023.

Her recent engagements include producing and performing with "Ongoing realities" (OR), researching digital technologies, visual & soundbased, as choreographic tools. OR has received support from The Swedish Arts Grants Committee, The Swedish National touring company & Riksteatern Väst, The Swedish Arts Council, Teater halland, Rum för dans and DC Sthlm. In her own artistic process she is exploring bodily memory, shapes, practices and patterns excisting un- or conciously in the body. This and politics of normativity is something that permeates her work and interest. Anna has also studied Social anthropology and Political science at The Stockholm University.

Annas first solo-piece "Boxwood" was developed in 2012 and part of 2013 "Dansbiennal" in Jönköping which toured Sweden with Dansens Hus/Urban Connection. She has recieved the ”Dance of the Year” award from Kingsize Magazine and has also worked in part pro bono projects in conveying space for training and community, teaching and mentoring upcoming dancers & creating clubs and events. Anna has been active in various parts of the dancefield and has a wide range of experience in the field such as choreography for artists, musicals or film, multimedia art exhibitions and tv productions. These experiences of different practices, productions and movement patterns makes her a versatile artist with interesting new approaches to artistic work.